Blair, Bush, And the Farce that is Chilcot Inquiry

The smarmy Mr. Blair talked his way through soft-balls lobbed at him by members of the Chilcot Inquiry on January 29th.


Watching him reminded me of reports that our former president, G.W. Bush and Tony Blair were users of Colgate toothpaste. Good for Colgate-Palmolive; probably boosted the sale. It was also reported that Blair -- described by some as Bush's poodle -- and Bush prayed together. Easy to imagine them doing so. Bush, a born-again Christian, who did his utmost to destroy the barrier between church and state during eight years as president, said he was told by god to go to war.
From June 26, 2003, edition of The Haaretz: - Source: http://www.commondreams.org/views03/0630-04.htm

According to Abbas, immediately thereafter Bush said: "God told me to strike at al Qaida and I struck them, and then he instructed me to strike at Saddam, which I did, and now I am determined to solve the problem in the Middle East.

And Blair, who converted to Catholicism after the end of of his term as prime minister of the United Kingdom, also talks in terms of divine guidance. Piety oozes out of him.
"The Men Who Stare At Goats", the delightful, spoofy novel about the CIA by Jon Ronson   contains the following about G.W. Bush and presidentialprayerteam.org (it exists).

"Pray for the strong relationship between Mr. Bush and Mr. Blair.  Pray that the President will  continue to be guided by the Lord in his deliberation with the U.K."

Last night, reading the book after Mr. Blair's appearance at the Chilcot Inquiry, I thought ah, that explains it!.  Mr. Blair certainly joined wholeheartedly in Bush's war.  It would appear that members of the Chilcot Committee responded too. This ought to silence those who question the power of prayers.  Quite useful to have a god available to support military actions against nations that displease us, have natural resources that we need, or are in a strategic geographical location -- toss a coin.
Jon Ronson's book has been made into a movie with George Clooney, Jeff Bridges, Ewan McGregor, and Kevin Spacey in the leading roles. Should be fun to watch.


Must confess that until reading reports about today's proceedings the name of Elizabeth Wilmshurst  was not known to most of us this side of the Atlantic.....even among those who closely followed the controversy about Tony Blair's role in committing Britain to the unjustified war against Iraq.

While actions by ex-president G.W. Bush and his administration have been relegated to history, it  is a different story in Britain.  Despite efforts to bury the facts, the Labour Government was unable to stop demands for a public inquiry and a 5-member committee headed by Sir John Chilcot was announced by  Prime Minister Gordon Brown on June 15, 2009. The Chilcot Inquiry has been ongoing since 24th November 2009.  Former Prime Minister Tony Blair is due to appear the Committee on Friday, January 29th.

It is unlikely that Blair will face criminal charges. Alastair Campbell, who served as Blair's aide,  breezed through "soft ball" questions during his testimony last week. Blair, an unctious, smooth-tongued orator, is not going to have any problem.

But the proceedings were shook up today during evidence by Elizabeth Wilmshurst, Deputy Legal Adviser to the Foreign and Commonwealth Office, 2001-2003.


The Iraq inquiry burst into life yesterday, thanks to a quiet, thoughtful yet furious woman who ripped into the government like a genteel but very hungry lioness. Elizabeth Wilmshurst was the first witness to get a round of applause from the public.


Her evidence was brief, less than an hour, but Jack Straw and Lord Goldsmith must have loathed every word. It was like being torn apart by a cross between Judi Dench as "M" and Princess Diana – softly spoken, but as hard and inflexible as a crowbar.

Perhaps, just perhaps, what she said will prod the members of the committee to shed their diffidence, take their fingers out and do the job for which they were selected.

*
The Green Hills of Stanford, California


Last Monday (January 18th) the rain came down in buckets and the wind howled through the night.  Tuesday,too, we got a soaking, and it is raining today. According to the weather man the rains will continue through the middle of next week with perhaps a break on Tuesday, the 26th.

Driving back from the Silicon Valley yesterday afternoon I stopped at Arastradero Preserve to take some pictures. Walked up the hill east of the parking lot and watched the flow of traffic on both north and southbound lanes of Highway 280. Beyond the highway were the rolling hills where the Stanford Dish is located.


The radio telescope commonly known as the Dish is the most prominent landmark in Stanford's 8,180 acres of open space. The Dish, 150 feet in diameter, scans the sky, gathering data on distant galaxies. -- Gaill Todd, SFGate.com


Very popular with hikers and runners during all seasons despite the fact that they are confined to  paved trails, ranging from 3.7 miles to 5 miles depending on the entrance.  I enjoyed it more before restrictions were imposed and enforcement began.  Previously one could hike and run on other trails, some of them longer and more arduous. But no doubt the authorities had good reasons for introducing the restrictions.

Looking down on Junipero Serra Freeway (I-280)


A heavy downpour caught me by surprise and I rushed down the trail to the parking lot.  Then  to home, dry clothes and a glass of red.

And how the wind doth ramm!

An ague hath my ham.

So 'gainst the winter's balm.

*
After two years of low rainfall, this season has reversed the pattern.  It was a pleasure to hike in Foothill Park, Palo Alto, this afternoon.  The trails were moist and the shrubs green.  Even found some wild flowers!  Unusual at this time of the year. Water was flowing through Buckeye Creek at places.  More rains expected next week. 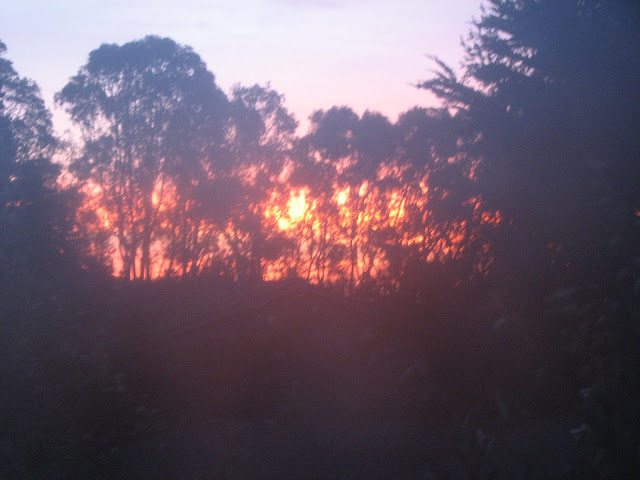 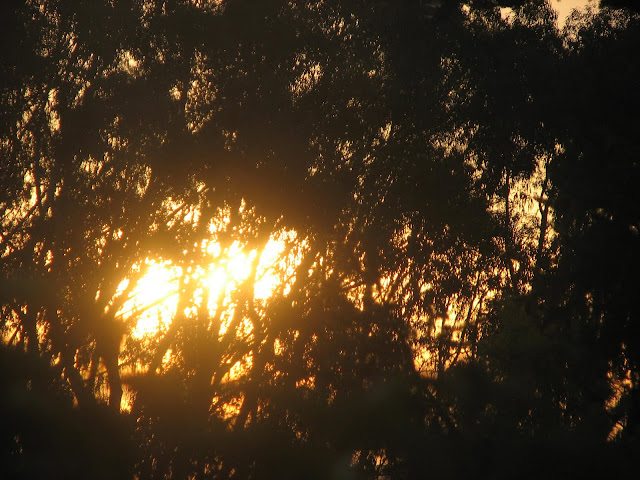 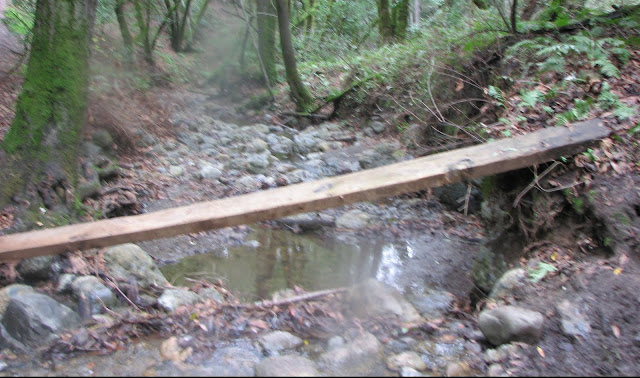 A bumper year for wild mushrooms.  They are to be found everywhere.  Not all are edible but the confluence of rains, sunny days, and varying range of temperature must be right for their growth.  The chanterelles rewarded foraging trips. Then there were oyster mushrooms.   Barely a mile from home I found a patch of Slippery Jacks under pine trees.  They are edible but not prized.

A patch of chanterelles 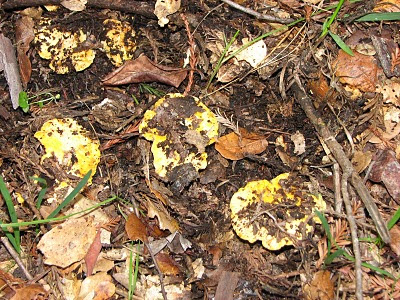 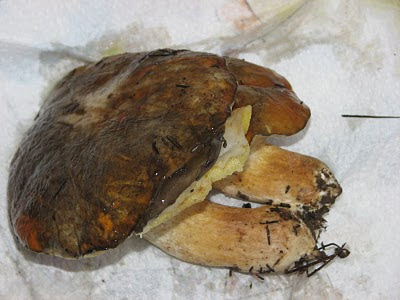 "Financial crisis panel seeks bankers' testimony" is the heading of a report by Binyamin Appelbaum in The Washington Post, Jan 8, 2010:

The commission appointed by Congress to examine the causes of the financial crisis is to hear testimony Wednesday from the heads of four of the nation's largest banks, as the panel begins a year-long investigation that its chairman described as an effort to figure out "what the heck happened."


Numerous reports in the media have given us a good idea of "what the heck happened". Major Wall Street financial organizations took part in questionable practices and made a lot of money until the mortgage finance bubble collapsed and caused repercussions that affected the entire U.S. economy.  Those responsible were bailed out by our government which failed to include conditions to restrain them. No punishment was sought.  Wall Street continues to be involved in exotic financial instruments and make profits.

The commission's report, when released sometime before the end of the year, would most likely be a sterile document and serve no purpose.

We hear occasional rumblings from the White House about reform. But a meaningful reform with teeth is not going to take place.  Elected representatives on both sids of the aisles receive contributions from  special interest groups. Lobbyists continue to wield power and influence legislations. The Republicans, of course, are out and out champions of unfettered free market economy, and the abuses that took place were,  to some degree, due to the failure or unwillingness of watchdog agencies to perform what they were meant to.

The Democrats are not blameless. Key positions in President Obama's team are occupied by people who were directly or indirectly part of Wall Street when the looting went on.  Among them Treasury Secretary Timothy Geithner who was head of the Federal Reserve Bank of New York.


They will deserve what is coming to them.  Unfortunately, at the end  nothing will change. One group of
venal legislators would be replaced by another.....probably even more venal.


The rains came and the threat of drought has disappeared.  Driving north on Hwy 280 a few days back, the rolling hillside near Stanford looked a lush green. Come May they will turn into the color some call "California gold".  But before that the daffodils will apear on both side of Hwy 280 to the delight of the motorists. We are fortunate to live here in the San Francisco Bay area....high cost of living and all.  And the political climate is liberal, tolerant;  quite different from the Central Valley about 100 miles south-east where there is no dearth of bigots.

January 1st was cloudy but not too cold (50 degrees F, 14 C).  Sugarloaf Mountain trails in San  Mateo  were muddy and slippery at some points but that did not deter hikers from trudging up the hill to look at the bay and the east bay across the San Mateo Bridge. 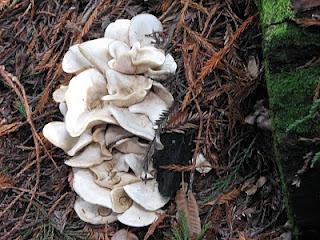 Beautiful, and delicious. I sautee them with chopped garlic and ginger; add firm tofu cut into dominoes, some Hoisin Sauce and Tamari (soya sauce).  Good with steamed rice. 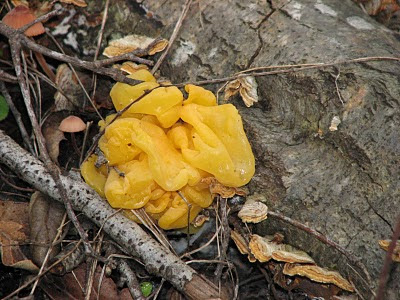 
Said to be edible but insipid;  I don't pick them. 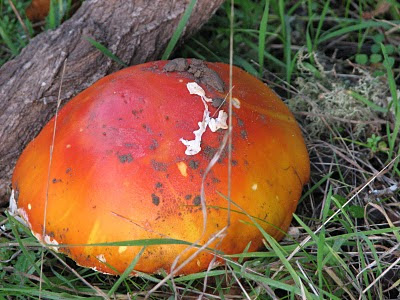 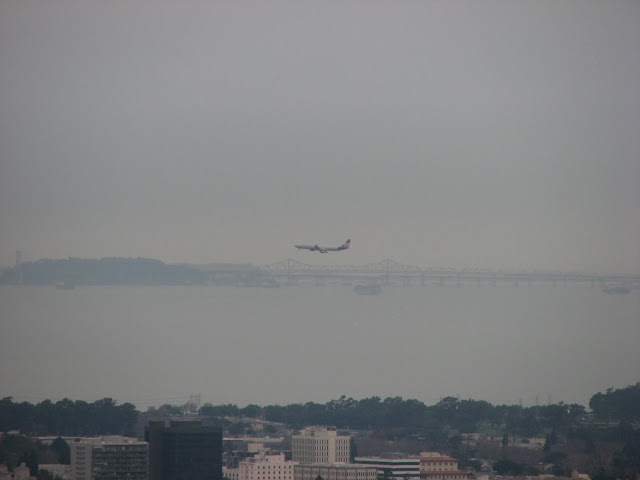 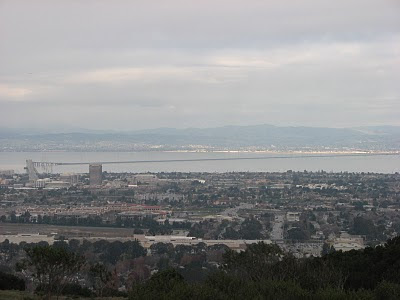 A patch of blue among the clouds 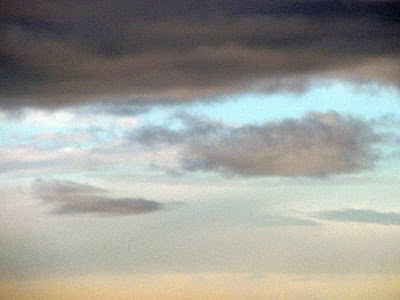 Monday is back to school and work.  A change in routine that some find hard to adjust to while others fall into the groove without missing a beat.

and cold rain falling on me?

Tut-tut, think of that!