During a recent bike ride on Canãda Road, saw some Clarkias in bloom. Buckeyes are turning brown. Other wild flowers have done their thing and disappeared.
Man and machines on northern end of Canãda Road
© Musafir

Still does not feel like summer. Day-time temperature unusually cool. But summer is here. And there are sure to be some days when we'll long for a cool breeze. In the meantime, make the most of it. Before you know it the schools will re-open; summer will be over.
Clarkias (Farewell to Spring) Blooming
© Musafir

Back to Alain De Botton
In my previous post about Remembrance of Things Past I had mentioned Alain De Botton's "How Proust Can Change Your Life". In his delightful book "The Art of Travel", De Botton wrote about Xavier De Maistre and his Journey Around My Bedroom.
In "The Art of Travel", photograph of De Botton's bedroom shows bookshelves and part of a bed that looks larger than my own. I decided to do some traveling in my bedroom. Not bad at all.
My bedroom
© Musafir

Bad days for the champions of family values. The governor's former Chief of Staff Tom Davis: "That Governor 'Realized He Sinned' (ABC's Good Morning America)
Ah, the sinners. They keep coming out of the woodworks and putting on a sickening dog and pony show, often with their wives at their sides. Republicans have become quite adept at playing the remorseful sinner, and their supporters readily forgive them. While Eliot Spitzer did not talk about sin, he followed the rest of the Republican playbook. Admittedly, Governor Sanford did not exactly follow the mea culpa routine of others who have gone through it before him. But being a member of God's Own Party, the governor 's hands are tied. While not as rabid as some other party leaders, Mark Sanford strongly supported impeachment of Bill Clinton. His position on issues such as same sex marriage and adoption rights for gays leaves no doubt that he,too, subscribes to the family values claptrap adopted by his party. He will follow the same road and seek absolution. He has no choice.

*
Stepping Back in Time

Marcel Proust's writings are said to have a soporofic effect on some readers. There are nights when it would be good to have a book on the bedside table that can help put me to sleep. That,however, is not what I experience when reading Proust.
Proust's Remembrance of Things Past is a book that I have read more than once. Perhaps, after the first time, it was more like skimming through some parts rather than reading every page but Swann's Way never failed to give pleasure. When Alain De Botton's How Proust Can Change Your Life was published in 1997, I said to myself "Hey, I know what he means". Did it really change my life? No. But it gave me hours of pleasure; made me think of times past, of people I had known -- all part of the process that makes us what we are.
A week ago while browsing in Menlo Park Library, I stopped at the bin marked "free". I no longer buy books for two reasons: I cannot afford to and I don't have room for them. Nevertheless, the bin was irresistible. I searched through the pile and found a treasure. It was a 1934 edition of the first volume of Proust's Remembrance of Things Past published by Random House. C.K. Scott Moncrieff's translation is superb and volume one contains:

Considering its age, the book is in excellent condition. 1934 was not long after I was born. The fly-leaf has an inscription "From the library of Vida Vamegli". If she owned the book in the early thirties she is not likely to be around. I drew a blank in searching for Vida Vamegli in the worldwide web. It is an Italian name. No Vamegli surfaced in the Bay area.
In my imagination I think of Vida Vamegli living in the San Francisco Peninsula. Who was she? A house wife? A teacher? Good, copperplate handwriting. Would I have enjoyed meeting her in person? Could she have been a Republican. Were Republican politicians as obnoxious in 1934 as they are today? How did the book end up in "free" bin of the library? Perhaps her books were donated and there were no takers in the library's book sale. Many library goers must have looked at it without finding it worthwhile. It was waiting for me. Not a resident of Menlo Park, I rarely go to that particular library. Fate!

Now, what am I going to do with the book? There will be days and nights when I will pick it up and re-read parts of it. After some time I shall probably give it back to a library with the hope that it will find a home with someone who loves Proust, or -- even better -- someone who will discover Proust for the first time.
*****
"When to the sessions of sweet silent thought
I summon up remembrance of things past......."
-- William Shakespeare, Sonnet No.30

Sculptures and Paintings among the Trees

*
Djerassi Resident Artists Program
Located in the foothills, off Skyline Road, in Woodside, California, is the Djerassi Resident Artists Program center established by Dr. Carl Djerassi.
A recent visit to the center with a group of friends was a very rewarding experience. The program is an example of how funding by private individuals can promote and nurture artistic creations. Full details of the program are available at http://www.djerassi.org/
A few photographs follow. 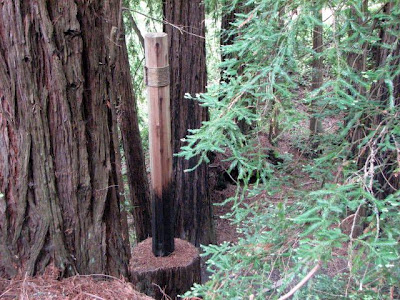 © Musafir
My favorite. A simple post embedded in redwood, it made me think of teachings of Zen masters. The part bound by spiral of rope, will expose red painted surface when the rope decays and distinegrates.

"Nothing exists: all things are becoming"
--Reiho Masunaga, The Soto Approach to Zen 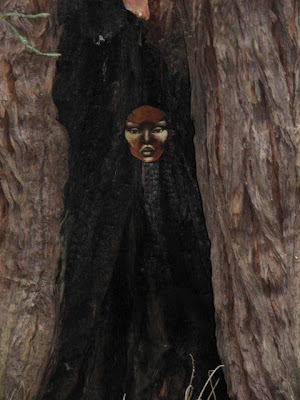 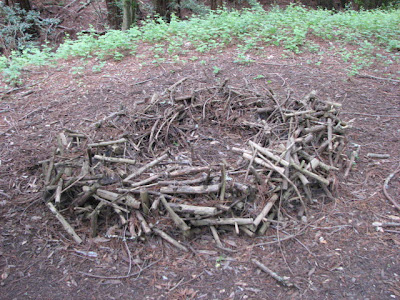 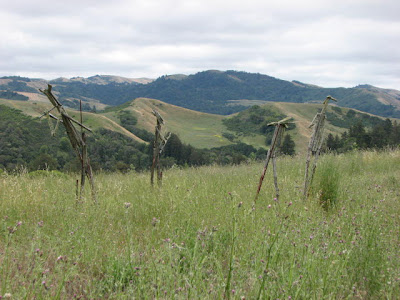 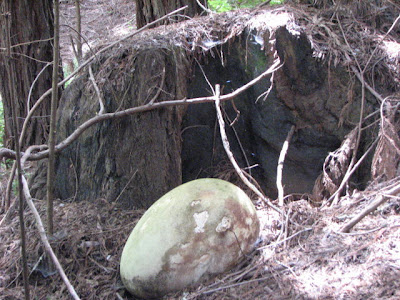 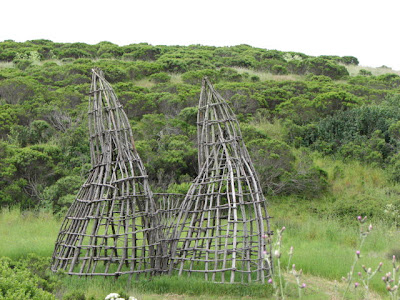 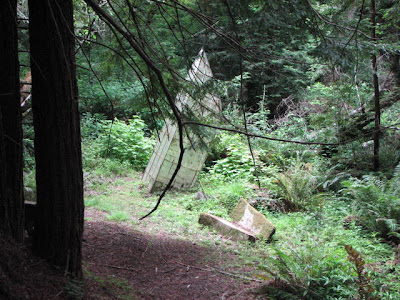 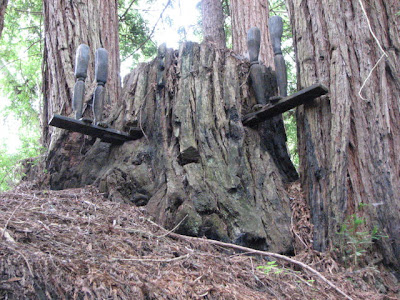 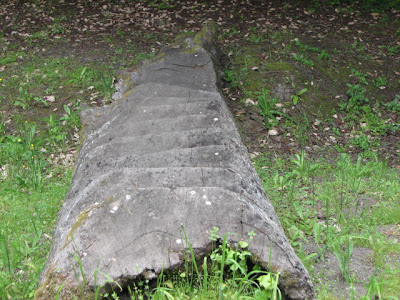 Spirit of a Dead Father, 1996, by Tome Adzievski 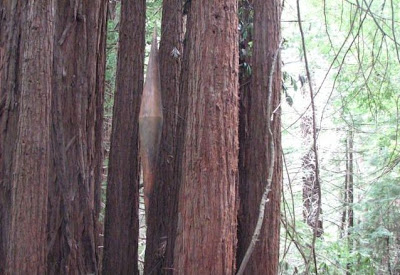 From Palo Cagao to Palo Alto, 2001, by Liset Castillo 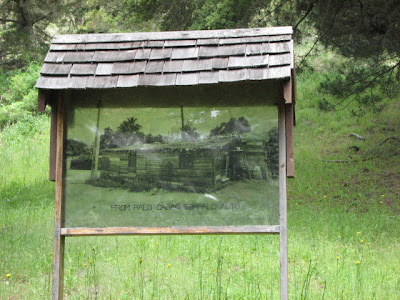 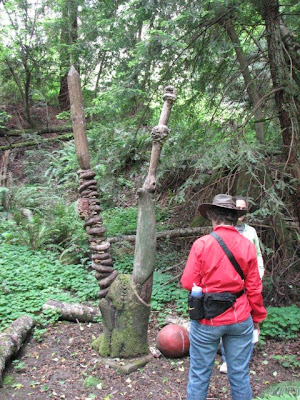 © Musafir
Note: The red sphere on the ground was originally at the top of the right side of the structure.
Faeries,2002, by Derek Jackson 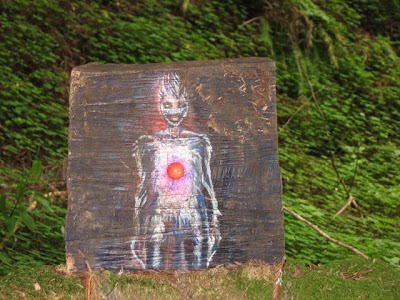 © Musafir
***
"Art does not solve problems but makes us aware of their existence. It opens our eyes to see and our brain to imagine."
--Magdalena Abakanowicz
The Old Barn 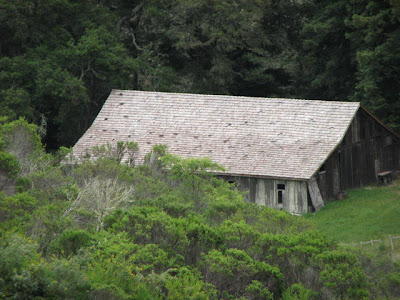 Looking out from inside the Old Barn 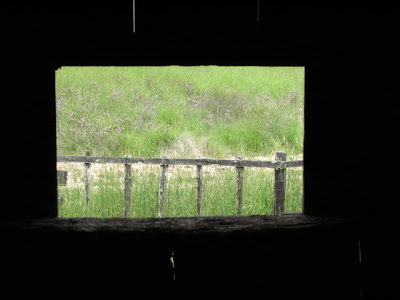 Gorgeous setting for the artists and their creations 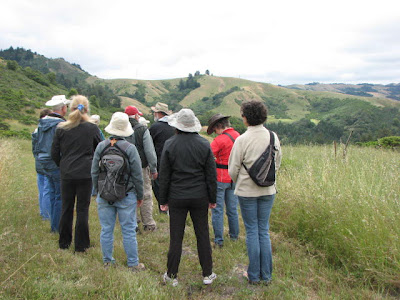 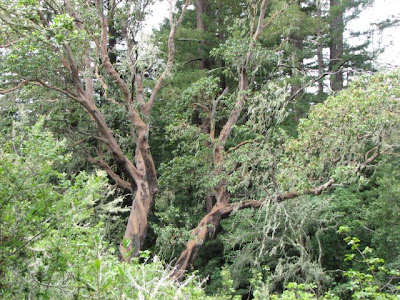 © Musafir
On the way back, picnic at the top of Windy Hill 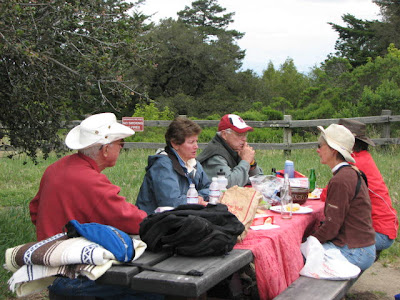