*
A Year of Disillusionment

"To dream of one government ending doesn't mean you'll want the one that comes in its place."
---Nathan Englander, The Ministry of Special Cases


In a few days a new year will begin. Our world is full of turmoil. Wars raging; death raining from the sky on innocent civilians who are pawns in power plays of major nations. Collapse of the scams concocted by Wall Street and blessed by government watch dogs have affected countries far beyond the shores of the United States. Not easy to be hopeful about the future. But hope for a peaceful world we must.

Peace still remains elusive.  Now we have another 'war president' in the White House.  We could be in Afghanistan for a decade or more. Barring a few, our elected representatives of the Democratic Party have proven to be not much different than the Republicans warmongers. The all-powerful military industrial complex is not interested in killing the goose that has been laying golden eggs. They spend a part of their huge profits to buy influence.  It works.

President Obama, who once made us feel hopeful about the future, went through a sea change.  Some people talk about Obama as a pragmatist.  Yes, in politics pragmatism has a role. But in Obama's case it is more than that. It is almost as though the Obama who campaigned during 2008 was a completely different person. His move to the right began soon after he was nominated -- part of his goal to bring the uncommitted middle to the fold, we thought.  But the wooing of the right never stopped.  Today, he bends over backward to appease them but there are no signs that he is succeeding in his courtship.

What is undeniable is his failure to follow through on issues.  From peace in the Middle-East to reform of Wall Street, Obama talks the talk -- only talks. He has a golden tongue.  Reminds me of ex prime minister Blair of United Kingdom who lied and committed his nation to Bush's war in Iraq. The bankers who had a major role in the economic meltdown were rewarded with bailout without restraints.  They are still involved in questionable practices.

It was sickening to follow the debate over health-care reform.  There were times when  members of Congress behaved as if they had emerged from caves. Republican Senator Tom Coburn (OK) tops the list of boors.

Prayer breakfasts are alive and well in Washington DC, the right venue for hypocrites.  President Obama, a natural-born practitioner of expediency, took part in one in January shortly after he was inaugurated.  Senator Coburn is certain to be among those who regularly attend prayer breakfasts.

Senator Coburn and others like him are abominations. Now the same bunch is fighting to protect funding for "abstinence only" sex education programs. Does it make you think of Bristol Palin?

Recently, during an interview when he was asked about his position on religion, British author Terry Pratchett  said:

'I'd rather be a rising ape than a fallen angel'

Here on the west coast,  Winter Solstice began shortly before 10:00 AM. today, December 21st, the shortest day of the year.


The rains came and threats of drought have receded.  Snowpacks in the High Sierras are building up.  Good news, not only for skiers; after two years of below-average precipitation water levels in the reservoirs were pitifully low.

Some trees in the neighborhood still have leaves but after each storm they look a little more bare. It is a pleasure to walk through the woods.  The dampness is so much in contrast to the warm weather.  Water running in the local creeks;  wild mushrooms abundant.

And blow the dry leaves from the tree! 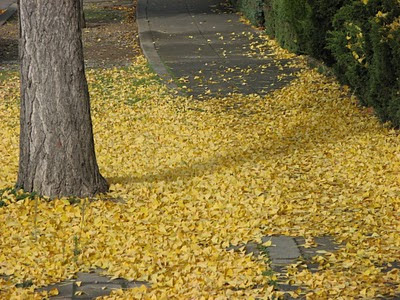 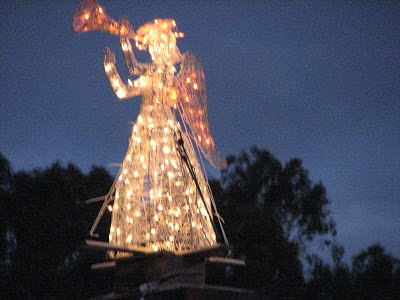 ©Musafir
On a rainy afternoon 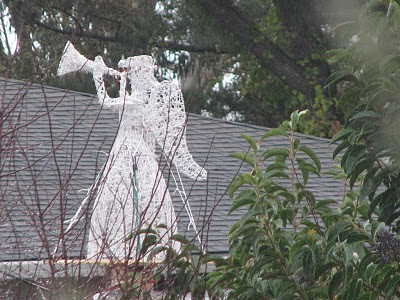 ©Musafir
And enshrouded by fog 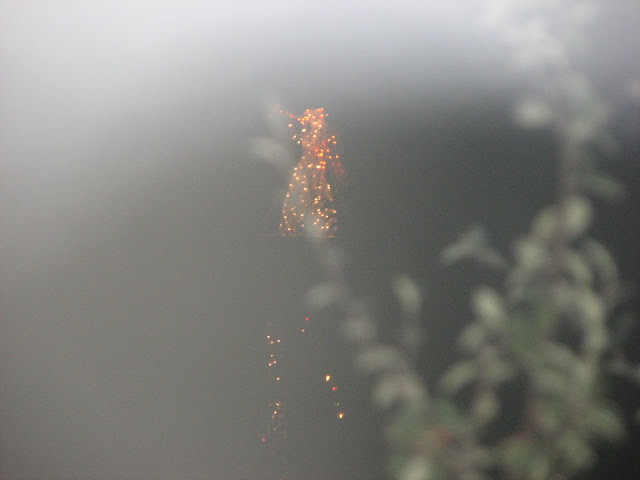 ©Musafir
A leafless tree at dusk 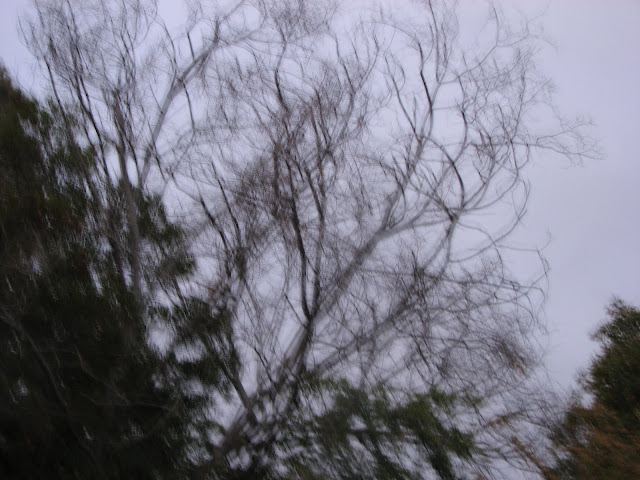 *
Our Politicians - Abortion and Viagra


The bill that President Obama wants is yet to take final shape.  Currently, the roadblock is by Democratic Senator Ben Nelson of Nebraska who "...............rejected a compromise on abortion funding aimed at winning his vote. Senate Democratic leaders, racing the clock to finish work on the bill before leaving for the holidays, struggled to line up the 60 votes they need to overcome Republican procedural hurdles."

Senator Barbra Boxer (D, CA) received a lot of flak for saying that if men are not restricted from buying Viagra then there should be no restrictions on the choice of abortion for women.

The Catholic Church, one of the strong backers of anti-abortion policy takes a different position on pedophilia.  After years of shameful silence, the Vatican has now taken some action to punish a few members of the clergy. Faced with the damning Murphy Commission Report which confirmed  sexual abuse of children in Ireland from 1975 to 2004, the pope had to act.  But by and large, when it comes to pedophilia by priests the Catholic press still remains very low-key.  One gets the feeling that it would be happy to let it be forgotten.

Sodden thought -- if Sarah Palin becomes president would her witch doctor, Bishop Muthee, be at the inauguration.

Even without Senator Nelson's demand for amendment, for majority of Americans it offers very little. There is nothing in the bill to contain costs for drugs and services. It is far from what Barack Obama talked about during the campaign of 2008 but that has become a hallmark of the Obama administration. Compromise, cut backroom deals, placate the conservatives.  Perhaps the strategy would pay dividends.  We shall find out next year after the Congressional elections.


The former British prime minister was interviewed by BBC's Fern Britton on December 12th, and is scheduled to appear in early 2010 before the Iraq War Inquiry Committee headed by Sir John Chilcot.

Tony Blair's comments raised a firestorm in British press, with condemnation by newspapers ranging from the very liberal Guardian to Telegraph, and  the conservative Timesonline.  But there is something "fake" about Sir MacDonald's indignation. Why did he remain silent when Blair was committing the United Kingdom to be an active partner in Bush's war?  Thousands of people marched against the war on the streets in England and other countries; there were many items in the media questioning the justification for war. Was he asleep during that period!   Another politician trying to save his reputation for posterity.

Regardless of the outcry over his comments and the enormous costs of his egotistical decision -- a decision which many feel was primarily motivated by his desire to please G.W. Bush -- Tony Blair is not at risk of facing charges in court.  The Chilcot Committee will do its thing.  Perhaps conclude with some remarks about lack of justification for what Blair did.  And that would be all.  That is how the system works, no different than what goes on in our country, this side of the Atlantic.

Here in America, too, barring a few exceptions politicians of both parties meekly supported the war cooked up by Bush and the neocons.

*
Selling us Down the River


Another strong statement from the eloquent one.  The headline of an item in Marketwatch.com  reads "Obama blasts Wall Street for economic crisis".


But somehow it does not cause excitement; does not stir hopes for stopping questionable practices on Wall Street.  Since Obama became president we heard many such statements on various issues and nothing happened.  The House has passed a bill.  The problem is getting it through the Senate.  Is he going to fight to get a meaningful bill through the Senate or are we going to see another copout as he builds consensus and yields ground until the bill becomes a mockery of his words.

"Then he got elected"


Obama may not have run to the left of Samuel Gompers or Cesar Chavez, but it's not like you saw him on the campaign trail flanked by bankers from Citigroup and Goldman Sachs. What inspired supporters who pushed him to his historic win was the sense that a genuine outsider was finally breaking into an exclusive club, that walls were being torn down, that things were, for lack of a better or more specific term, changing.


Then he got elected.


What's taken place in the year since Obama won the presidency has turned out to be one of the most dramatic political about-faces in our history. Elected in the midst of a crushing economic crisis brought on by a decade of orgiastic deregulation and unchecked greed, Obama had a clear mandate to rein in Wall Street and remake the entire structure of the American economy. What he did instead was ship even his most marginally progressive campaign advisers off to various bureaucratic Siberias, while packing the key economic positions in his White House with the very people who caused the crisis in the first place. This new team of bubble-fattened ex-bankers and laissez-faire intellectuals then proceeded to sell us all out, instituting a massive, trickle-up bailout and systematically gutting regulatory reform from the inside.


According to the the latest Rasmussen Reports (December 13), 23% of voters "strongly approve" his performance while 42% "strongly disapprove".  Support for members of Congress continues to remain low. If the current trend continues then in 2010 the Democrats would lose a number of seats in both House and Senate.

And Sarah Palin still remains a favorite of a large number of conservative Republicans.  Come 2012 we could see her as a presidential contender.  It would be funny if it were not for the stakes involved. So, those of us who have lost our enthusiasm for Barack Obama will again vote for him simply because the alternative would be much worse.  Depressing.

*
The Man Who Promised Us "Change"


The signs began to appear even before he was elected. Some of us watched with growing uneasiness as the Obama agenda unfolded. Then, after being elected, his team made it clear that not much is going to be different. Still we waited for the president to make some moves that would indicate that it was "not business as usual". We can go on waiting until the cows come home.

He has his eyes on 2012, and will do anything, cut any deals to win a second term. That  is going to be difficult to achieve no matter what he does.


The Rasmussen Reports daily Presidential Tracking Poll for Wednesday shows that 27% of the nation's voters Strongly Approve of the way that Barack Obama is performing his role as President. Thirty-nine percent (39%) Strongly Disapprove giving Obama a Presidential Approval Index rating of -12 (see trends).

These results are collected from nightly telephone interviews and reported on a three-day rolling average basis. The overwhelming majority of interviews for today’s update were conducted before the President’s speech on Afghanistan last night. Prior to the President’s speech, 35% gave him good or excellent marks for handling the situation in Afghanistan while 41% say he’s doing a poor job.

He is doing in Afghanistan what George Bush did in Iraq. Even played the 9/11 card at West Point on December 1st.

Although they could rally in his support in 2012, the Black voters mostly stayed away during this November's elections; young voters,too, failed to participate in significant numbers; the white middle-class is disenchanted. His core supporters who had a major role in his victory are finding it hard to remain faithful.

The president who promised "change" turned out to be no different than others before him.  He is part of the corrupt system.

Defense contractors must be gleeful; they are going to have a good Christmas.